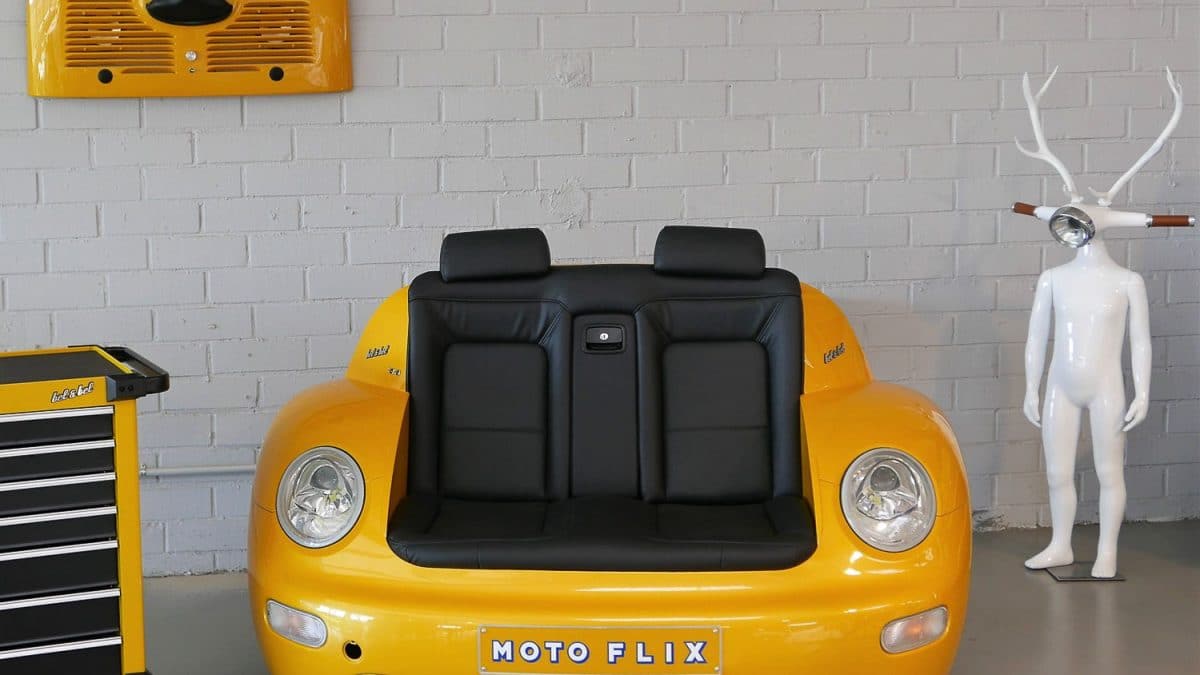 The VW New Beetle Sofa is an endearing design piece, that Bel&Bel intends to pay tribute to the Volkswagen Concept 1. Designed in California by J. Mays and presented to the world in Detroit in 1944 and dressed with its iconic yellow body. The Beetle reinterpreted the story of one of the most popular and loved cars in the world: the Kdf-Wagen (“Kraft durch Freude Wagen “Or car of the force by means of the joy). Later it would be called Type 1, due to an article New York Times from 1938, the Kdf-Wagen became popularly known as the Volkswagen Beetle.

The original Beetle awakened people’s imagination like no other car until then. It was fun, carefree, youthful … thanks to these values and the groundbreaking advertising campaigns that it carried out, it became the most popular vehicle in the world.

The production model of the New Beetle was presented to the world at the Detroit Motor Show in 1998. Despite its renewed appearance and improved performance, its spirit remained true to the original. For its history and for all that this car represents, at Bel&Bel we wanted to create our own reinterpretation of the Beetle. Thus, to create our first VW New Beetle Sofa, we started with an original model of the first generation of the New Beetle, recovered from a scrap yard.

For our design, we took both the front of the body, as well as the hood and back seat. The goal was to create a design breaking yet comfortable two-seater sofa. As for the front of the sofa, we wanted to keep the original headlights of the car (equipped with short and long-range position lights), we also include on the sides the intermittent pilots, which are fully functional. The LED lighting system is connected directly to the electrical network through a single cable.

We adapted the measurements of the original rear seat of the car, and fully re upholstered it, combining black leather and perforated black leather for a more original look which also adds a sporty touch to the piece. We wanted to keep both the headrest like the car’s center armrest, to add functionality to the sofa and at the same time, preserve part of the cool essence of the New Beetle.

To complete the set, the back of the VW New Beetle Sofa was made from front hood of the car which was completely restored. The Volkswagen logo it stays on top, and perhaps the most avant-garde touch is provided by a practical and ample storage space, whose interior is made of maximum treated quality wood.

Like most of our pieces, each VW New Beetle Sofa is only made on request and handmade. It is a unique and customizable piece that will not pass unnoticed and just as the Beetle did, it will be able to fill any space with personality, joy and positivity.